Home > Summary, the Book where the Rain was born - Pablo Neruda 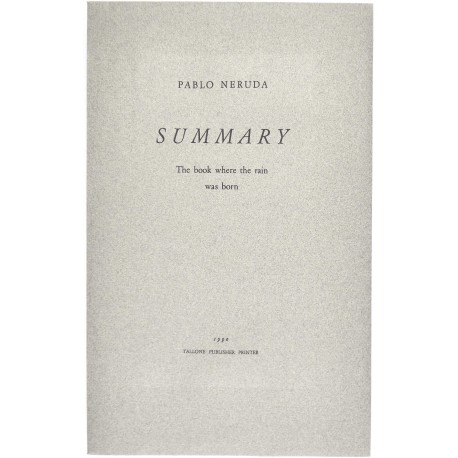 Summary, the Book where the Rain was born - Pablo Neruda

One of 8 special copies printed on Misumi paper.
Twenty poems dedicated to Neruda's youth (his birth; the first voyage; his step-mother; his father; his first time at sea; …). English edition.

Anthology of 20 poems which depict salient experiences occurred in the childhood and youth of the Poet: Birth, First voyage, La mamadre, The father, The first sea, The southern land, Winter school, Sex, Poetry, Shyness, The Pachecos, The lake of swans, The lost child, The human condition, Injustice,

The abandoned, Superstitions, Books, The nocturnal train, The pension of Maruri Street.

Introduction by Pablo Neruda, written in 1962 while sending these inedited poems to Alberto Tallone, who published them in Spanish for the first time in 1963. English translation from Spanish by Cosimo Corsano. Final note by Giuseppe Bellini.

Volume in 8vo format of138 pages typeset by hand in the Tallone types, designed by Alberto Tallone, cut by Charles Malin in Paris and cast by Radiguer.

This is one of 8 special copies on Misumi paper.

Moreover, the book comes in the following editions:

- 200 copies on laid cotton paper made in Sicily. In the manufacturing process, the ground water which originates from the volcano Etna has been used. This water has the perfect mineral composition for producing high-quality paper.

- 87 copies on tinted-color Sant’Ilario paper made in Tuscany (images and prices on request).