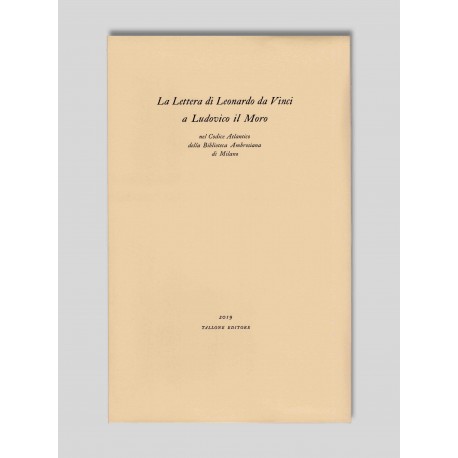 The first modern curriculum vitae, written by Leonardo da Vinci to the Duke in Milan, proves to be a document of rare effectiveness. Its ten-point structure describes a man so versatile and polymath that it would be difficult for any other candidate to compete with that.

Limited print run of 85 numbered copies printed on pure cotton cream-colored Umbria paper, made in Fabriano (of which 20 copies not for sale, marked with alphabet letters, were printed for the Ambrosiana Library).

- 71 copies printed on pure cotton ivory Magnani wove paper, made in Tuscany(details and prince on request);

- 24 copies printed on pure cotton off-white Magnani laid paper, made in Tuscany, which include original etching by Giuseppe Penone, signed and numbered (details and prince on request);

- 6 copies printed on pure cotton heavy Magnani paper, made in Tuscany, details and prince on request);