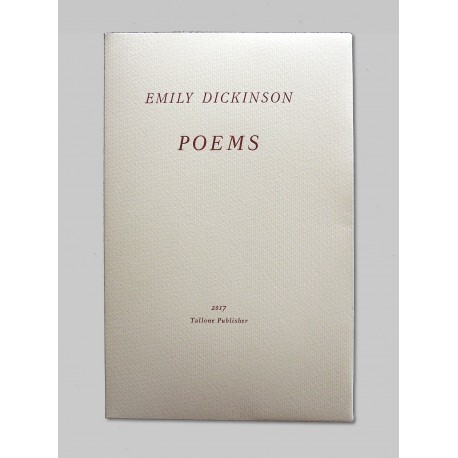 Limited and numbered print-run of 13 copies on hand-made Umbria paper, made of pure cotton in Fabriano.

Besides these copies, there are other copies for sell on this website, which have been printed on Magnani and Sicilian papers, for a total printrun of 300 copies. All the different editions are listed below.

Volume in 8vo format (cm17,5x27) of 180pages entirely typeset by hand in Italic Tallone type, designed by Alberto Tallone, cut by Charles Malin in Paris and cast by Radiguer. The introductory study by Professor Barbara Lanati has been set by hand in 9 and 10-point Garamond, cut on steel punches by Henri Parmentier in 1914 and cast by Deberny.

Limited and numbered print-run of 13 copies on hand-made Umbria paper, made in Fabriano laid paper.

- 40 copies on off-white wove Magnani paper which include a lithograph print by Giulio Paolini, expressly made for this book, signed and numbered. The Artist signed the book as well (for sale on this website);

- 218 copies on off-white wove Magnani paper, made of pure cotton in Pescia, Tuscany (for sale on this website);

- only copies on light-grey Magnani ancient paper (for sale on this website);prices and details on request).