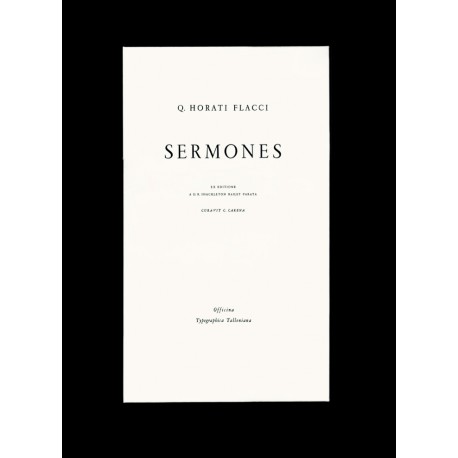 Latin edition. Print run of 120 copies printed on Magnani paper. Through 18 reflective-narrative essays, Horace offers an acute investigation of the human condition and configures his idea of a more equitable society.

18 reflective-narrative essays in hexameters written between 41 BC and 30 a.C. Through the description and reflection on the vices and the ways of society, Horace offers an acute investigation of the human condition and configures his idea of a more equitable and balanced society.

Volume in 4to format, typeset by hand in Garamond types, hand-cut on punches by Henri Parmentier and cast by Deberny&Peignot foundry.

The volume is housed in a slipcase and a box, custom hand-made to an exact size, whose exteriors are covered with Ingres paper. The book title is letterpress-printed on the slipcase’s spine.

Limited print run of 120 copies on Magnani paper made in Tuscany.

The total print run of this edition is limited to 470 copies, of which: 300 copies on Arches paper made in France; 120 on Magnani paper made in Tuscany; 30 on Amatruda paper made in Amalfi (on sell on this website); 20 copies on exotic papers made in Japan (sold out).