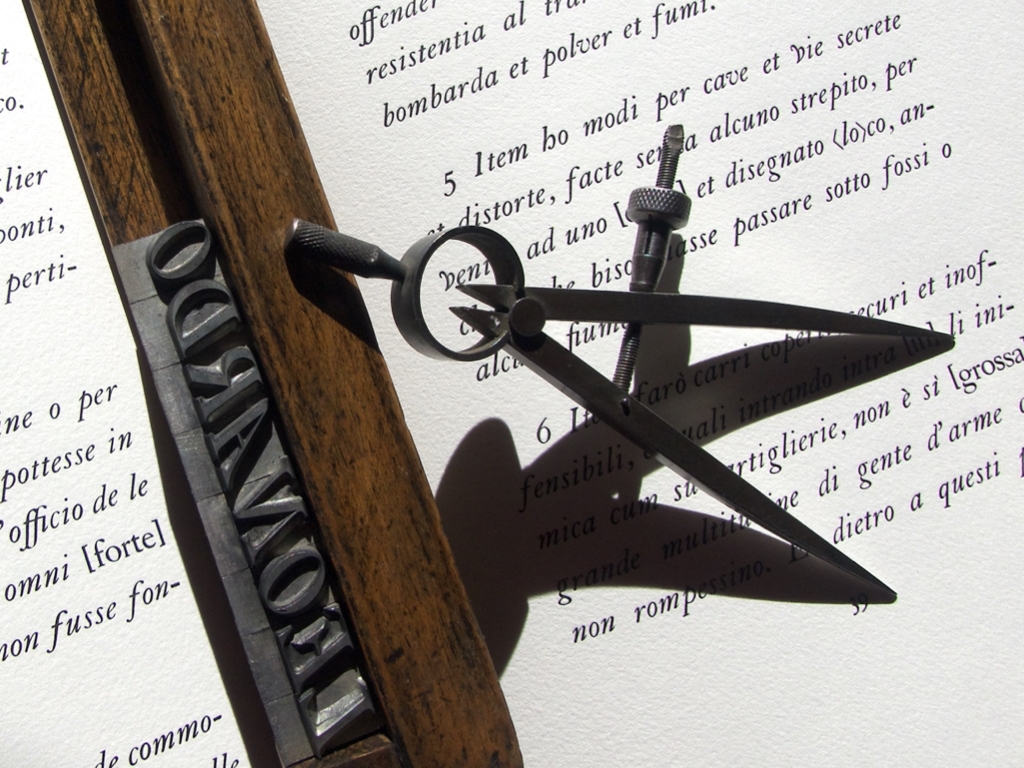 The first modern ‘curriculum vitae’, written by Leonardo da Vinci to the Duke in Milan, proves to be a document of rare effectiveness.

188 numbered copies were printed, of which:

- 85 numbered copies on pure cotton cream-colored Umbria paper, made in Fabriano (sold out).

- 24 copies on pure cotton off-white Magnani laid paper, made in Tuscany, which include original etching by Giuseppe Penone, signed and numbered (euros 5000);

- 6 copies on pure cotton heavy Magnani paper, made in Tuscany, details and prince on request);

- 2 copies on pure cotton Rives paper, made in France, where Leonardo spent his last two years (sold out).

His curriculum (Foglio 1082 r, Codice Atlantico, Ambrosiana Library) largely anticipates what Leonardo would have actually accomplished during his long stay in Milan, from 1482 until 1499.

In particular, 7 out of 10 points are devoted to military skills, as Leonardo intends to leverage on the expansive ambitions of the Duke, by showing his ability to build war machines and thwart any adversary fortification.

A volume in 4to format (22x35 cm) of 52 pages typeset by hand in 16-point original Caslon types. The steel punches of this precious and rare type were hand-cut by William Caslon in London in the first half of the 18th century. These types are part of the original equipment of Tallone’s typographic studio, which has been continuously in operation since the 18th century.

Neither monotype nor linotype are used. Tallone Press also do not print from plastic plates (photopolymer), which are derived from digital compositions.

This edition was sewn by hand in the most ancient typographic studio in the world still in activity, where tradition and modern aesthetic combine to give the best possible reading experience.

Size (cm)
22x35
Typefaces
Entirely typeset by hand in Caslon type, cut by William Caslon on steel punches in the first half of the 18th century, and cast in the original matrices of the time.
Paper
Pure-cotton paper
Number of pages
52
Total print run
71
Weight (kg)
0,9