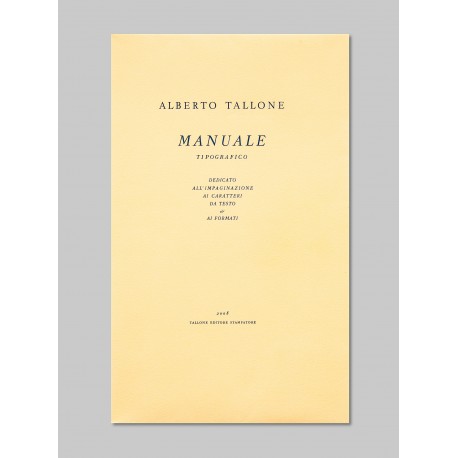 Dedicated to the aesthetics of page layout, types and book formats.

It includes original Tallones' quartos from the 1930s onwards, together with lower-case alphabet tables which show all the original founders' typefaces owned by the Tallones, each of them described by Enrico Tallone.

This Manuale is part of a set of four volumes (Manuale I, the Appendix, Manuale II, Manuale III), devoted to all the aspects of book design.

The first two volumes of the set, Manuale I and the Appendix, cannot be bought separately, but only with the complete set.

The Manuale Tipografico II is a volume in the 4to format, of 212 pages entirely typeset by hand with the 12 point Tallone types, designed by Alberto Tallone and punch-cut by Charles Malin in Paris.

- 15original sheets and quartos extracted from the books printed by the Tallones in France, from 1931 till 1959, and in Italy since then, which show different layouts and paginations;

- an aesthetic commentary of the types which belonged to Maurice Darantiere, Alberto Tallone and the ones added afterwards, including the metal types designed and punch-cut in Italy during the 20th century, followed by the series letterpress-printed of the complete alphabets of each one of these type fonts. Finally,18files describe the books printed by Alberto Tallone which hadn’t ever been catalogued so far;

- a separate folder, inserted in the same slipcase and box as the book, contains 12 original quartos and octavos extracted from the books printed by the Tallones in 7different decades. The number of original pages and quartos included varies on the basis of the print-run.

Limited and numbered print run of 260 copies on Magnani paper.

Moreover, few copies have been printes on hand-made papers from Sicily and Fabriano(images and prices on request). 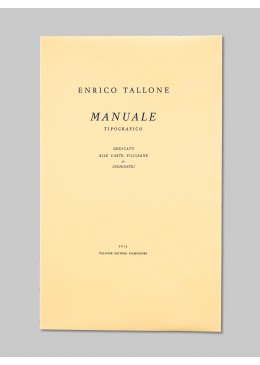