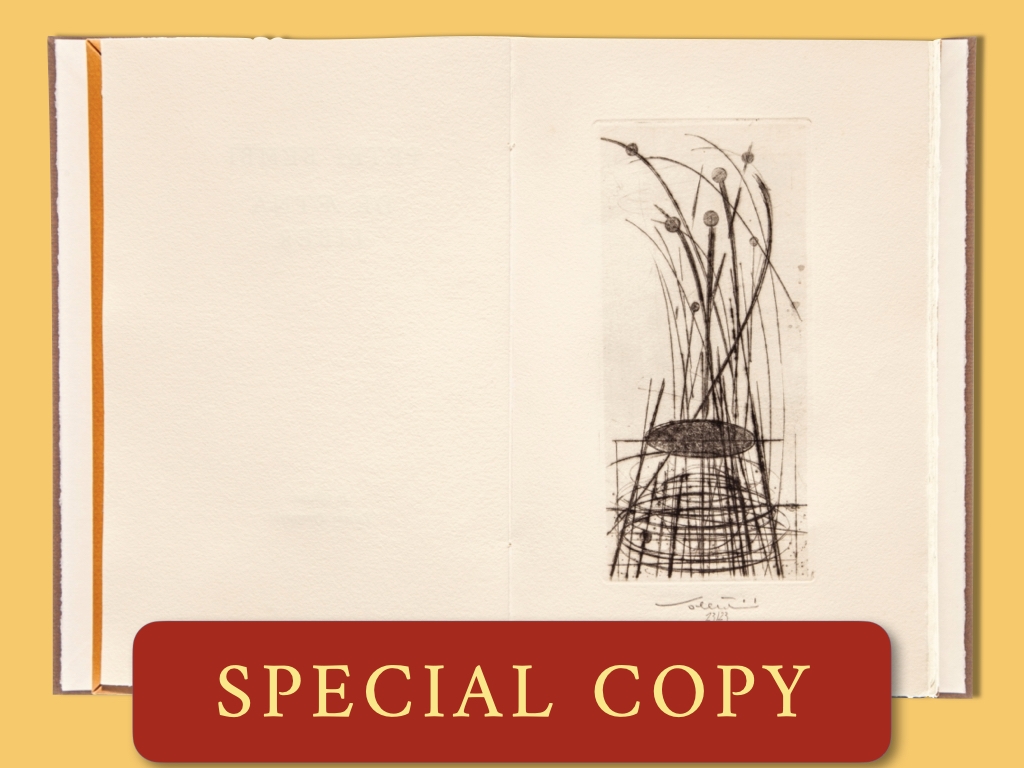 Limited edition of 23 numbered copies typeset by hand in moveable types, letter by letter, and letterpress printed on pure cotton paper made with the groundwater from the volcano Etna.

Etching by Walter Valentini, signed and numbered, made expressly for this edition.

This edition printed in Latin is a tribute to the famous incunabulum printed by Aldus Manutius in 1495, which is considered to be the first modern book.
Bembo tells about his trip to Sicily to learn Greek and about his ascent to the top of volcano Etna.

This paper have been made in Aci Bonaccorsi (Sicily) using the groundwater of the volcano Etna, the highest peak on the island of Sicily.

The volume has the same 8vo format (15x24cm) of the first edition of De Aetna, which was printed in 1496 by Aldo Manuzio, and which is considered to be the first ‘modern’ book, thanks to both its small format (the ‘ancestor’ of today's paperbacks), and the roman type used for the text, which has become a timeless classic in publishing).

This edition takes account of the typographic corrections handwritten by Manuzio and Bembo in the margins of one copy of the original edition, which is kept at Ambrosiana Library in Milan.

The 96 pages of this book have been typeset by hand in Garamond, a type which owes a great deal to Aldo Manuzio's roman type, which appears for the first time on the first edition of De Aetna.

This edition has been printed in 263 numbered copies, of which:

- 134 copies on cotton paper made in Sicily, which do not include the etching by Walter Valentini (sold out);

- 46 copied on cotton paper made in Sicily, which include Valentini’s etching;

- 50 copies on pure cotton Alcantara paper made in Sicily, of which 23 include am etching by Walter Valentini, made expressly for these 23 copies (for sale on this website).

Size (cm)
16x26
Typefaces
Typeset by hand in Garamond type, cut on punches by Henri Parmentier in 1914 and cast in Paris by Deberny & Peignot Foundry. Garamond owes a great deal to Aldus Manutius's roman type, engraved for him by Francesco Griffo.
Paper
pure-cotton Alcantara paper. This paper have been made in Sicily using the groundwater of the volcano Etna
Number of pages
96
Total print run
23
Weight (kg)
1