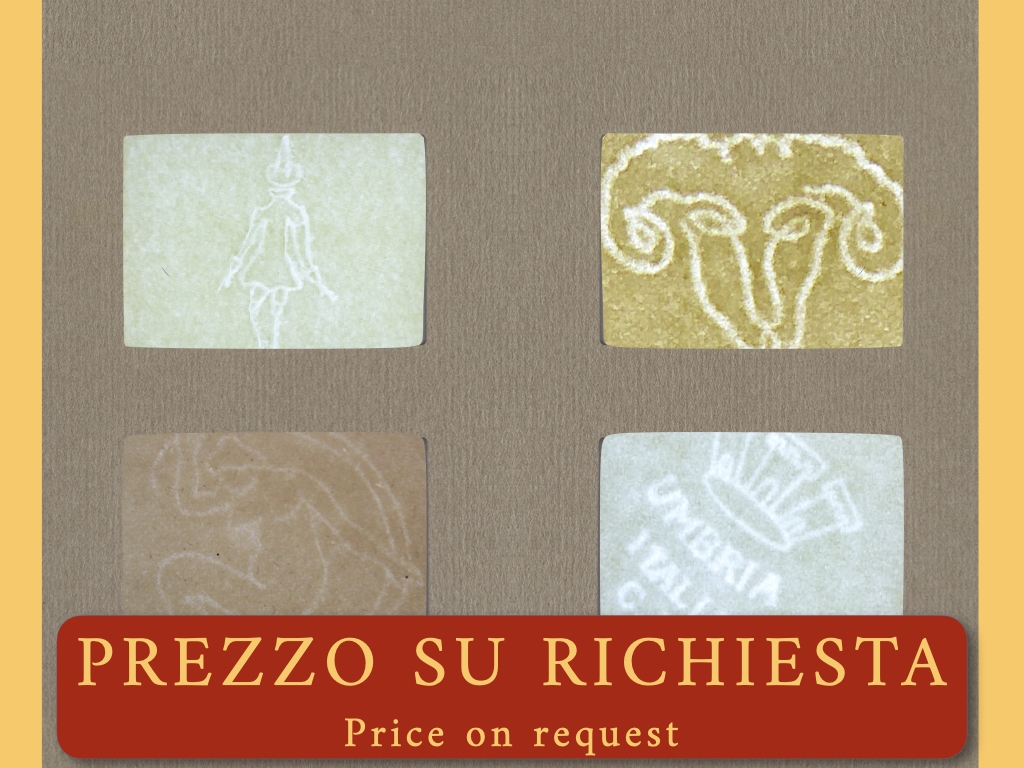 – PRICE ON REQUEST – STILL AVAILABLE BY CONTACTING THE PRINTER –

Dedicated to the aesthetic of papers, watermarks and inks.
It includes more than a hundred original samples of ancient papers (starting from the 15-16th century), as well as original samples of the finest 20th-century typographic inks and papers (among which those used in the 1930s-1950s by Mondrian, Léger, Picasso, Chagall, De Chirico, Aristide Maillol and the greatest artists based in Paris).

This Manuale is part of a set in five volumes (Manuale I, Complemento, Manuale II, Manuale III, Manuale IV), each dealing with a different aspect of book aesthetic.

The samples of ancient papers (starting from the 15-16th century), watermarks and inks are inserted in custom made frames.

Quarto (cm 37x23). Volume of 128 text-pages entirely typeset by hand in 12 point Tallone types, designed by Alberto Tallone and cut by Charles Malin in Paris.
Captions and footnotes are typeset by hand in Garamond type, cast by Deberny & Peignot.

358 copies have been printed, of which:

. 300 copies on off-white mould-made paper made of pure cotton in Sicily, without optical brighteners, made expressly for this edition, which contain a hundred and ten original specimens of papers, watermarks and inks.

Listed as follows are the samples of papers, watermarks and inks included in every copy of the book (deluxe copies contain an higher number of original papers and watermarks, which date back to the 15th century):

Such a unique collection of precious specimens of papers, watermarks and inks has been possible due to the centuries-old history of our Printing house, whose origins date back to the late 18th century, making it the most well equipped and most ancient typographic studio in activity today.

This unique journey through the aesthetics of papers, watermarks and inks is intended for those who, like us, always pursue clarity and elegance in designing books devoted to literature and poetry.

Numbered and limited edition typeset by hand in original foundry types and letterpress printed on very fine paper, made to last. Each copy is sewn by hand, and individually numbered.

The number of movable types handled for the typesetting of this book, make it an exceptional endeavor in the contemporary printing scene.

Tallone collectible books are a symbol of made in Italy: they are the only ones in the world typeset by hand and totally handmade in the most ancient typographic studio in the world still in activity since the 18th century.

The volume is housed in a hand-made hardcover chemise and slipcase, whose exteriors are covered with Ingres paper. The book title is letterpress-printed on the slipcase’s spine.