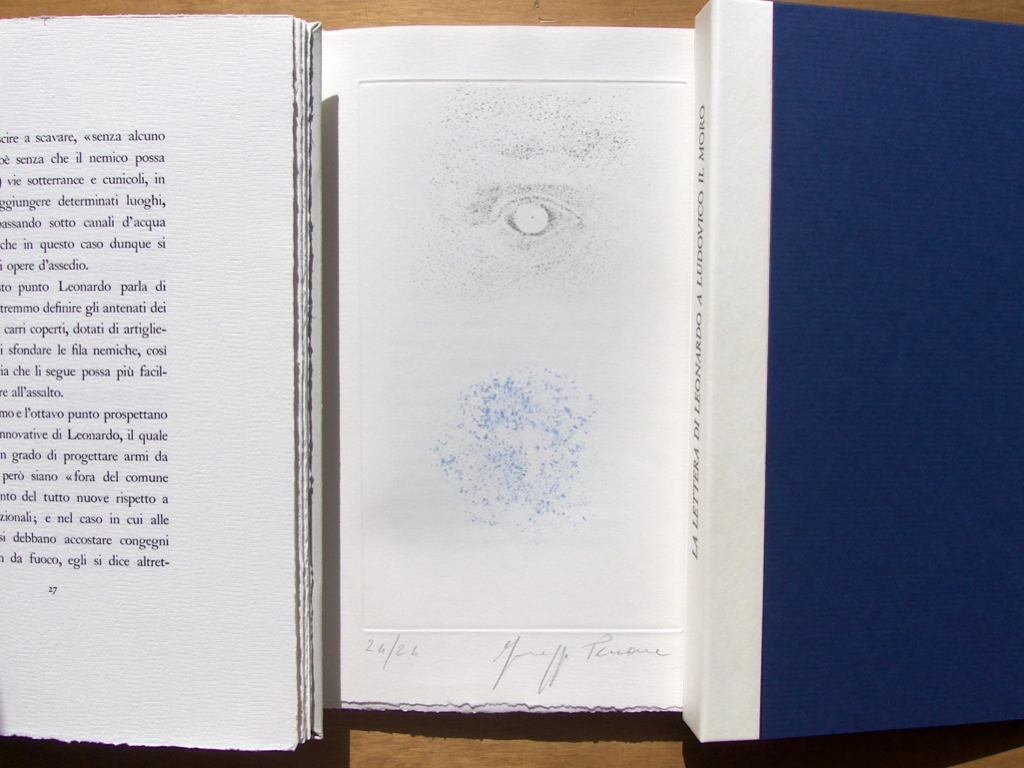 Limited edition of 24 copies typeset by hand in movable types, letter by letter, and letterpress-printed.

One of 24 copies with a drypoint etching by Giuseppe Penone.

The first modern curriculum vitae, written by Leonardo da Vinci to the Duke in Milan, proves to be a document of rare effectiveness. Its ten-point structure describes a man so versatile and polymath that it would be difficult for any other candidate to compete with that.

Limited print run of 24 copies printed on pure cotton off-white Magnani laid paper, made in Tuscany, which include an etching by Giuseppe Penone, signed and numbered. The etching, entitled "Identità", was printed by the Atelier René Tazé in Paris.

The drawing of the eye is a drypoint etching on a copper plate. Below, the center of the pupil has been enlarged and drawn with a dry point onto copper, creating a set of dots.

- 85 numbered copies printed on pure cotton cream-colored Umbria paper, made in Fabriano (of which 20 copies not for sale, marked with alphabet letters, were printed for the Ambrosiana Library);

The thousands of letters handled for the typesetting of this book, make it an exceptional endeavor in the contemporary printing scene.

Numbered and limited edition typeset by hand in original foundry types and letterpress printed on very fine exclusive paper, made to last. Each copy is sewn by hand, and individually numbered.

The number of movable types handled for the typesetting of this book, make it an exceptional endeavor in the contemporary printing scene.
Tallone collectible books are a symbol of made in Italy: they are the only ones in the world typeset by hand and totally handmade in the most ancient typographic studio in the world still in activity since the 18th century.