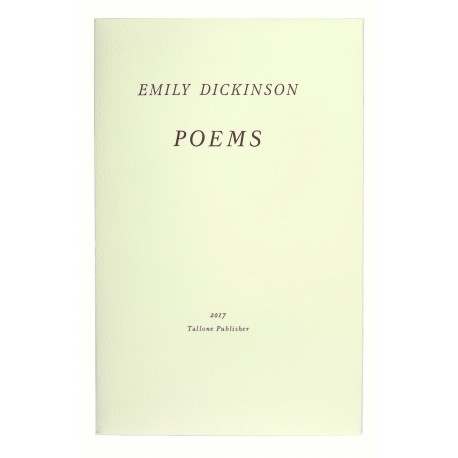 Print run of 2 copies on Fabriano Museo paper.
English edition. Collection of 130 poems by the intelligent, ironic, solar New England poetess, one of the greatest poetical voices of all time.

Print run of 2 copies on pure-cotton Fabriano paper, handmade expressy for this edition by the Fabriano Museum of Paper and Watermark.

Besides these copies, this book comes in different editions, listed below and for sale on this website.

Volume in 8vo format (cm17,5x27) of 180 pages entirely typeset by hand in the exclusive Italic Tallone® type, designed by Alberto Tallone, cut by Charles Malin in Paris and cast by Radiguer. The introductory study by Professor Barbara Lanati has been set by hand in 9 and 10-point Garamond, cut on steel punches by Henri Parmentier in 1914 and cast by Deberny.

- 2 copies on pure-cotton light-blue paper, made exclusively for the Tallone Press in Sicily (images and prices on request);

- 2 copies on pure-cotton Fabriano paper, handmade expressy for this edition by the Fabriano Museum of Paper and Watermark (images and price on request);